On Saturday morning, free instruction was provided by 14 volunteers (teachers and Southland Canoe Club members) to get beginners up to speed with river skills.
Six instructors taught basic skills to the 25 novices, initially on the upper lake by the camp site, then moving onto the river run.
Those students who had done some paddling in the past were taught on the easy ‘between the lakes’ stretch of the Mararoa River.
The most experienced paddlers were selected for coaching on the Kiwiburn course (actually they had to erect the course first which took most of their time, so unfortunately they didn't get their coaching!). 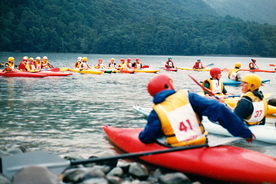 Getting ready for start of downriver race, North Mavora Lake (1990)
At lunchtime, the downriver race was held on the 1.5km ‘between the lakes’ river run.


After lunch everyone drove 10km south to the Kiwiburn swing bridge rapid on the Mararoa River. Again, graduated instruction sessions were provided on the fun slalom course, so that everyone had the best chance to feel up to tackling the next day’s event. 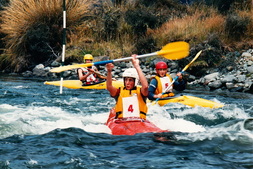 extra points for a trick on the final wave, Kiwiburn rapid (1990)
The fun slalom at Paddles Up is not your normal white-water slalom – Bruce modelled it on the spectacular BBC television events run from 1983-1993 in Britain, where experts had to attempt a range of novelty tasks as they paddled down a long grade 3+ rapid. For our purposes the difficulty level was toned down, which saw students ducking under a low limbo bar, eskimo rolling, honking a squeeze horn, tossing their paddle over a high rope, whacking a hanging ball, as well as negotiating the regular downstream and upstream slalom gates on Grade 1 – 2 rapids. 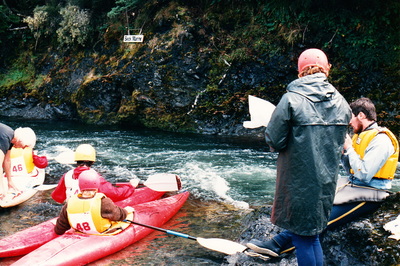 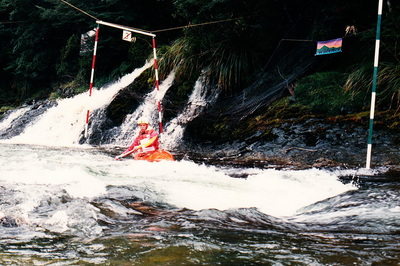 Gate 3 was the most challenging 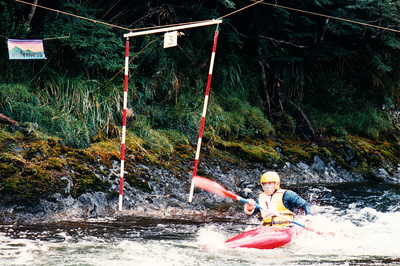 power on down the course 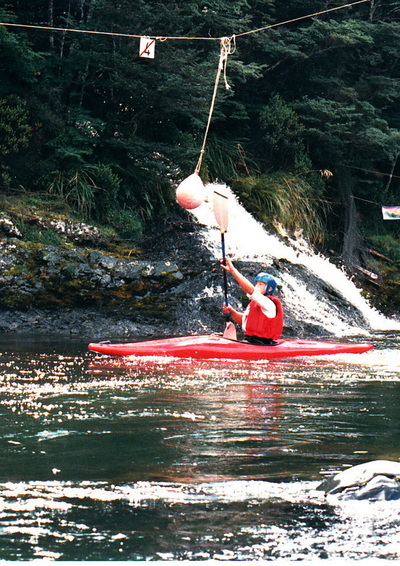 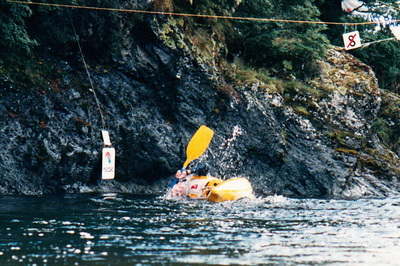 earn 50 points for an eskimo roll 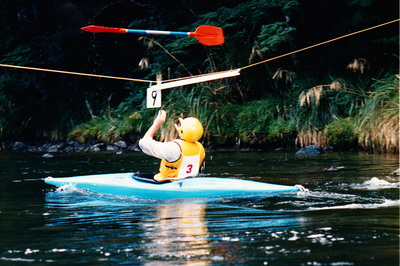 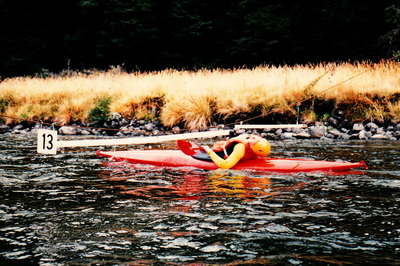 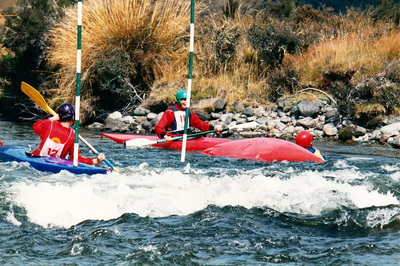 team work to the end

Which teams were at the first event? 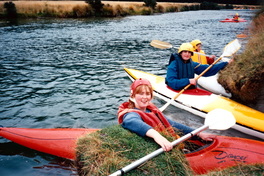 Why start Paddles Up? 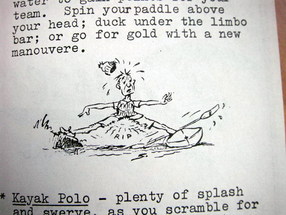 part of Paddles Up 1989 brochure
Paddles Up aimed to increase participation, so every competitor stood a good chance of getting a prize, not just the winners. Lots of spot prizes were given out, plus recognition for effort and sportsmanship. In addition, prizes were given to anyone (student or adult) who did something memorable in full public view.

Rita Elliot (SGHS) got the prize for most improved girl, and Mark Preece (SPC) was the most improved boy. Steffan Hogh picked up a prize for effort. Graeme Swift was rewarded for throwing his paddle away at the paddle toss, and Doug Allan’s display of swimming beside his kayak was recognised (both have gone on to become very accomplished paddlers)!

Huge increase in numbers for 1990 event 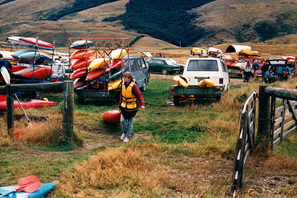 congestion in the Kiwiburn carpark (1990)
By 1990, its second year, word had got out about Paddles Up. The competitor numbers swelled to 144 paddlers. Bruce increased his efforts with organisation and sponsorship (over $1000 of prizes were up for grabs).

But is was organised chaos – a ridiculous number of paddlers jammed into the eddies during instruction sessions, not to mention the kayaks lying underfoot in the car park and along riverbanks!

From 1991, Otago ran its own event and the Southland Paddles Up weekend was capped at 33 teams.
Bruce's other websites
Powered by